Let’s Test Your Knowledge on Durga Puja (When and who started the tradition of Durga Puja in Bengal? What does the Banana Wife signify?) When the entire nation celebrates Navratri, a 5-day long worship of Devi Durga emerges in Bengal. When and who started the tradition of Durga Puja in Bengal? What does the Banana Wife signify? Why the celeberation of Durga Puja called ‘Akal Bodhan’? – these are some of the things that most of us are not aware of.

Here are some lesser known or overlooked facts about your favorite Durga Puja. This year, while you are celebrating the festival with your friends or family, impress them with your newfound knowledge. 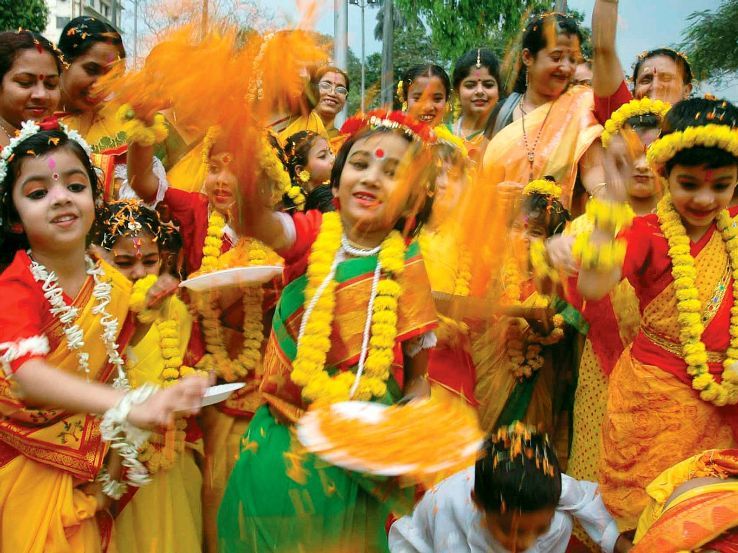 Durga Puja is celebrated around October or the Hindu month of Ashwin (autumn). It is during this month that the sunshine is believed to be lingering on in the lush green field and the skies are filled with cotton-candy clouds. And oh, kash phool is found in abundance. This is when every kid and adult in Bengal knows that Maa Durga is coming to town!

I am sorry to shatter this beautiful image, but Durga Puja is not really meant to be celebrated in Ashwin. (Don’t kill the messenger. This is written in the Hindu scriptures!). It is a Spring festival. However, you can thank Ayodhya’s King, Rama. He wanted to seek blessings from Maa Durga before his infamous battle with Ravana, the King of Lanka. He worshipped her by offering 108 lamps and 108 blue lotuses. And thus, Durga Puja started being celebrated during autumn and came to be known as Akal Bodhon or out-of-season worship.

#2 Maa Durga Murti is incomplete without the soil from the Land of the Midnight Fairies.

Ever since Paro visited Chandramukhi to ask her for some mitti (soil) for creating the idol of Durga Maa in Sanjay Leela Bhansali’s Devdas, I wondered if it is really true that Durga idol is incomplete without soil from the steps of a tawaif (courtesan or prostitute). A little research and the glaring hypocrisy of my society was staring back at me! Indeed, the Maa Durga Murti is not complete without a handful of soil brought from the steps of a brothel.

Wait, that is not all. It is believed that while entering a brothel, a man leaves behind all his “purity” in the threshold of the brothel. And therefore, the soil is extremely virtuous. If that is not ironical, I don’t know what is! Also, the method of acquiring the soil is super dramatic. Like watching a Bollywood masala flick! The Pujari is required to beg for the soil from the prostitute and only then will she give him the soil.

#3 The first grand celebration of Durga Puja in Undivided Bengal dates back to the late 1500s.

In the late 1500s, the first grand worship of Maa Durga has been recorded. As per the folklores, the zamindar or the landlords of Malda and Dinajpur started the 1st Durga Puja in Bengal. According to another source, the first Sharadiya or Autumn Durga Puja was organized by Raja Kangshanarayan of Taherpur or Bhabananda Mazumdar of Nadiya in 1606 in Bengal. It is believed that Kangshanarayan created a huge stir and excitement during the festival as he spent nearly 8 lakhs (which was a really huge amount at that time!).

#4 The first Durga Puja celebration in Calcutta (Kolkata) was organized in 1610.

The family that is linked with the selling of 3 villages – Kalikata, Sutanuti and Gobindapur – (which came to be known as Calcutta or now, Kolkata decades later) to the East India Company organized the first Puja in Kolkata in 1610. To be precise, it was the founder of the Sabarna Roy Chowdhury family, Lakshmikanta Mazumdar. As time went by, the Hindu Kings also came together to become a part of the practice of worshipping of Maa Durga in their household and helps the Puja to spread far and wide to Rajmahal, Gaur and Krishnanagar. Slowly, Durga Puja became the most vital annual festival of Bengal and in particular, the Bengali Hindus. Today, people from all over the world come together to witness the grandeur of the festival and even the celebrations have spread to other parts of the world. Even London is not spared from the Durga Puja fever and river Thames in west London is where the idols are immersed!

At present, the Puja observed in the heritage house of Sabarna Chowdurys in Barisha is the oldest Puja in Bengal. Away from the glitz and glamour, a 400-year old Puja is observed here complete with all the traditions. There is no special occasion as the family believes to strictly follow the age-old tradition. The speciality of their Puja is at atchala or eight-roofed temple where Maa Durga resides for the 5-days. The unique blend of Shakta and Vaishnava faiths seen during the Puja celebrations is a real treat! Don’t you love pandal hopping? All thanks to the 12 friends of Guptihara in Hoogly, West Bengal, we have what we call “community Durga Puja”. These 12 friends thought that Puja should not be the monopoly of the zamindars. They decided to collected contributions from the local residents and organize the first ‘baro-yaari’ Puja or the ‘twelve-pal’ Puja in 1790.

This Puja concept was brought to Kolkata in 1832 by Raja Harinath of Cossimbazar. He performed Durga Puja at his ancestral home in Murshidabad from 1824 to 1831 and then decided to include the entire community. So much more fun when everyone can worship together, no?

As for the now famous Sarbajanin or community Puja, it was started in 1910 when the Sanatan Dharmotsahini Sabha organized the 1st grand community Puja in Baghbazaar in Kolkata. This Puja was organized with full public control, public contribution and public participation.

#6 Do you know the legend behind Ganesha’s Kola Bou? 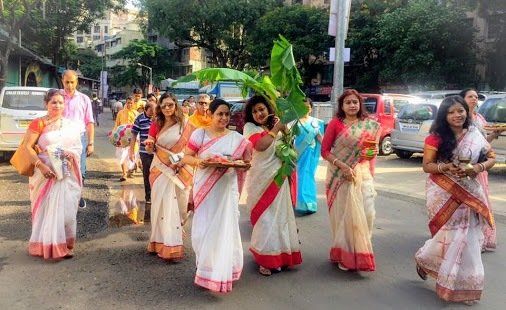 My family celebrates Durga Puja in our ancestral house and I have always wondered why they wake me up at 5am to watch a trunk of plantain (banana) tree being washed and bathed at the ghat. I know it is called Kola Bou, but I never really knew why. During my research about all the lesser known things about Durga Puja, I stumbled about an article that said this whole Kola Bou thing actually has legend behind it. And according to folklores, when Ganesha had set out with this wedding procession, he realized that he has forgotten something and returned. On returning, he saw that his mother Durga was eating bowlfuls of rice. Ganesha questioned her as to why she wanted to finish all the rice on that day itself, Durga had responded saying, “What if your wife does not give me enough food”. On hearing this, Ganesha stepped out of his house, cut a banana tree and handed it to mother Durga saying, “This is your daughter-in-law”. Since that day, Ganesha’s wife is given her due reverence during the festivities and in fact, she is worshipped before the other celebrations kickstart. She is draped in a beautiful red-bordered white saree and vermilion is smeared on its leaves. The Kola Bou proudly sits on the right side of Lord Ganesha, along with all the other deities.

So, how many of these facts were you already aware of? I am sure there are so many that I did not put it down here because I would then be writing a mini novel! Please feel free to comment below if you have anything interesting to share about Durga Puja.